Classic car number plates might not be a topic you would think we would be writing about here at Regal. However, we are all about sharing information and championing local businesses. Especially when we think the information is interesting and useful to you.

We are delighted that many of our customers are classic car enthusiasts and classic car garage owners. Through our many years of experience, we know that classic car owners are fastidious about the garages in which they keep the cars. When choosing suitable floor paints for the car garages and storage, they will often call us for advice and help in choosing the best paint for longevity and aesthetics.

Whilst light grey is still the most popular colour, the classic car market also tends to invest in traditional colours. We sell a lot of epoxy floor paint and quick drying floor paint in Brunswick Green.

Steeped in history, green is the colour of British Motor Racing and its origin in motorsport dates to the early 1900s. Manufactured here on site, our Brunswick Green paint is very similar to British Racing Green.

Evoking memories of the beautiful cars of the 1950s and 60s, perhaps the most iconic racing car in British Racing Green is still the Jaguar D-Type.

However, there are not many cars as jaw-droppingly beautiful as Steve McQueen’s “Green Rat”! After purchasing it second-hand, he famously had his stunning Jaguar XKSS stripped down and repainted in British Racing Green and could often been seen driving it on Mullholland Drive in the Santa Monica Mountains. 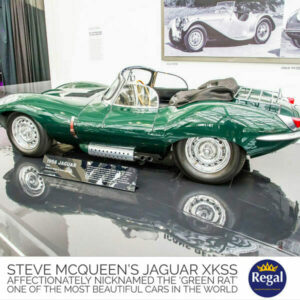 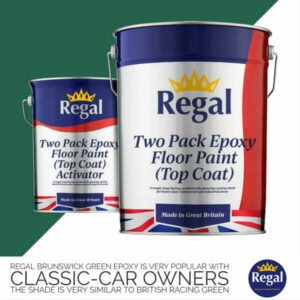 With a customer base of such passionate of car owners, we though you might be interested in a business local to us here in Stoke-on-Trent. Simpson and Co make the most glorious die-pressed aluminium black and silver classic car number plates using traditional methods.

Following the Motor Car Act of 1903, vehicle registration plates were introduced in the UK.  Commonly known as ‘number plates’, they became a legal requirement so that vehicles could be easily traced in the event of an accident or other incident.

Back in the day, the registration plates were black and silver at both the front and rear of the vehicle. Up until recently, black and silver plates were only permitted on vehicles registered before 30th December 1972. However, in April 2015 this was changed to vehicles registered prior to 1st January 1975. And this is now rolled out year on year to any car that is over 40 years old.

Who are Simpson & Co?

Evolving from Hall & Simpson in 1963, Simpson & Co is a third-generation family business. Still based in Stoke-on-Trent, the business is now run by husband and wife team, Richard and Jacqui.

You may not know that Stoke-on-Trent is otherwise known as ‘The Potteries’. Known throughout the world, our area is home to pottery giants such as Wedgewood, Royal Doulton and Spode.

Many local people worked in the pottery businesses and Jacqui’s grandad was one of them. He worked as a copper engraver in the pottery industry and it was this skill and experience that he used to develop the engraving side of his family business. Along with machine engraving, Simpson and Co have always manufactured vehicle registration plates.

Ken Simpson (Jacqui’s dad) worked alongside his father and was instrumental in inventing the method used to make reflective plates. Becoming a legal requirement in the early 1970’s, reflective plates were notorious for ‘bubbles’.

A solution was needed and so Mr Simpson, along with an owner of a leading company in the industry, went to Manchester University. Here, they were to work out the PSI needed to eradicate bubbles when adhering the reflective tape to the perspex. After much experimentation, Mr Simpson suggested trying a mangle. To this day the ‘mangle method’ is still used.

Amazingly, Simpson and Co still have the original mangle. Having taken great care of the mangle since the 1960s, it is still used to make pressed aluminium black and silver plates.

Using Rare Traditional Methods: One of Only Three Companies in the UK

Even though they don’t blow their own trumpet, Richard and Jacqui produce beautiful classic car number plates using traditional methods.

They are one of only three firms in the UK still making black and silver pressed aluminium number plates using an original flypress on the premises.

THE ORIGINAL MANGLE AND FLYPRESS 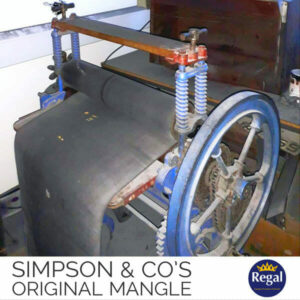 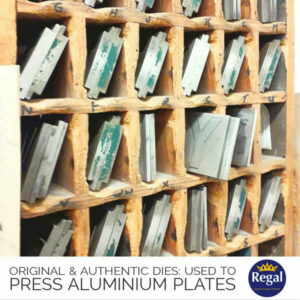 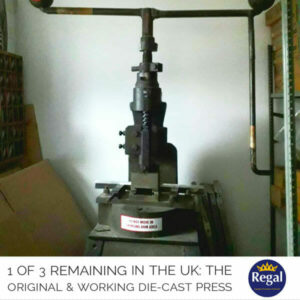 Introduced in the early 1930s, die pressed aluminium plates are simply very elegant. Simpson and Co still have the original dies that they have used since the 1960s. These are used on the original flypress to press the aluminium blanks. If you are a classic car owner who is looking for authenticity, you really can’t get any better.

How are Pressed Aluminium Number Plates Made?

We thought some of you might be interested in how the plates are made on the flypress. Jacqui has explained the process.

“The pressed aluminium plates are made from 16-gauge aluminium blanks with a beaded/semi-sheared edge. Firstly, the plates are masked and then stamped out on the original fly press using the original dies. The masking is then peeled from around the letters and edging. High-quality Hycote XUK0272 black gloss is then used to spray the unmasked area of the plate. A clear lacquer is also applied. After spraying, the rest of the masking is removed and the plates are then stoved in an oven for 15 minutes.”

Simpson and Co can make the following sizes on the original flypress: –

Even though great care has always been taken to preserve the original dies, wear and tear is inevitable. Over time, the dies for smaller lettering became too worn, meaning that they are no longer available using this traditional method. 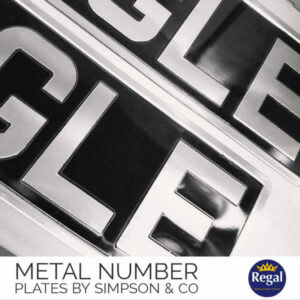 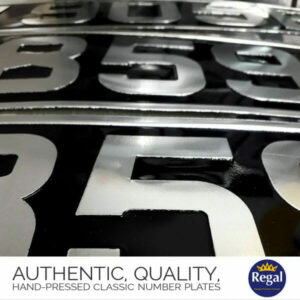 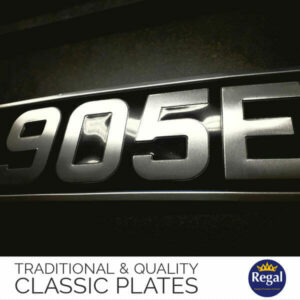 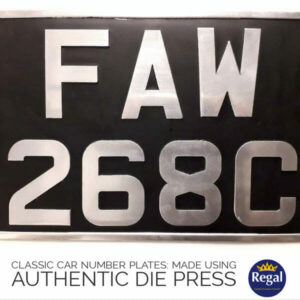 Other and Special Sizes Catered For

For any other or special sizes or scooter plates, Simpson and Co also make top-quality black & silver perspex plates.

Perspex number plates also look fantastic when made correctly. Simpson and Co can make any sized perspex plates and they can be finished with either smooth letters or can be reverse engraved.

Simpson and Co have also been making reverse engraved black and silver number plates for a long time. In previous years reverse-engraving was done manually using templates. Nowadays the engraving is done by a computerised engraving machine.

The reverse engraved plates can be made in any size. And, again, high quality products are used (Hycote XUK035 aluminium coat spray). 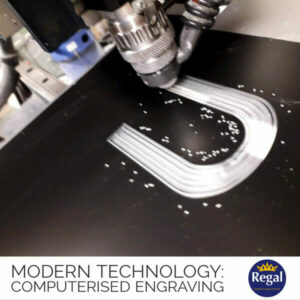 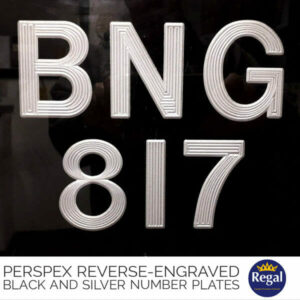 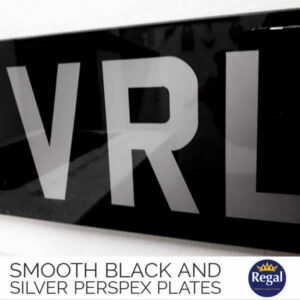 Replacement modern number plates are also available and can be made in any size and shape (within the law).

All reflective plates are made to the current British Standard: BS AU 145d.

Have you ever wondered why UK vehicle have white number plates on the front and yellow at the back when most other countries have both white?

It is so that we can distinguish between the rear and front of a vehicle at a glance, especially given the gloriously unpredictable UK weather…..notably fog!

The very helpful Richard and Jacqui welcome any enquiries via telephone 01782 212705 or email simpson.dawson@btconnect.com. 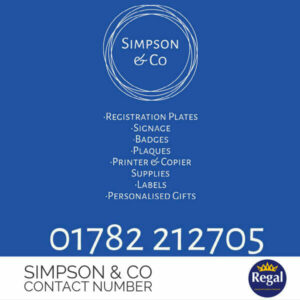 Looking for Floor Paint for Your Classic Car Garage?

Please don’t hesitate to contact us on 01782 550733 with any floor paint enquiries or if you need any help in choosing the correct product.

You can also browse our floor paint page. 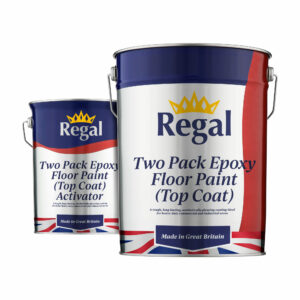 Two Pack Epoxy Floor Paint (Top Coat) - This epoxy floor coating is designed for application to concrete, cement and non ferrous metals. It provides excellent resistance to water, solvents, acids, alkalis and salts and gives superb adhesion to all recommended substrates. Tough finish has long lasting abrasion and impact resistance. Recommended for areas receiving heavy traffic (vehicle/trucks). Following application of the product: Do not park vehicles or place heavy equipment on the floor for a minimum of 48 hours Do not get the floor wet for a minimum of 7 days as this will cause bloom (discolouration) - Coverage: 5-7 m² per litre - Touch Drying Time: 12-16 hrs - Recoat: 24 hrs - Hard Drying Time:48 hrs - Full Cure: 7 days 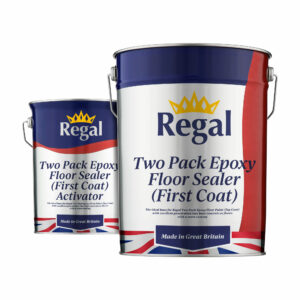 Two-Pack Epoxy Floor Sealer (Under Coat) - This epoxy floor paint (first coat) is designed to prepare the surface of concrete, cement and non ferrous metals. This gives an ideal base for epoxy topcoat or acts as a seal coat for bare concrete floors. Resistant to water, solvents, acids, alkalis and salts. Tough finish, and has long lasting abrasion and impact resistance. Recommended for areas receiving heavy traffic (vehicle/trucks). Following application of the product: Do not park vehicles or place heavy equipment on the floor for a minimum of 48 hours Do not get the floor wet for a minimum of 7 days as this will cause bloom (discolouration) - Coverage: 5-7 m² per litre - Touch Drying Time: 12-16 hrs - Recoat: 24 hrs - Hard Drying Time: 48 hrs - Full Cure: 7 days

Would you like to be in with the chance of winning a £50 Amazon eVoucher?

Would you like to be in with the chance of winning a £50 Amazon eVoucher? Why don’t you enter our monthly #showusyourproject competition? We love to see how our customers are using Regal products and, no matter how big or small your project, we welcome all entries!

Simply send us a few words about your project and the paint that you used, along with photographs* to sales@regalpaints.co.uk. Or if you are social media savvy, why not tag us @regalpaintuk on Facebook or Instagram?