The Golden Hinde was a famous English galleon which was perhaps best known for the bold circumnavigation of the globe which took place between 1577 and 1580. The ship was captained by Sir Francis Drake. The Golden Hinde was originally known as “Pelican”, but the ship was renamed by Drake mid-voyage in 1578. This renaming took place in honour of his patron, Sir Christopher Hatton, whose crest was a golden ‘hind’ (a female red deer). Hatton was one of the main sponsors of Drake’s world voyage. The full-sized, still sailable reconstruction exists in London, on the south bank of the Thames.

Recently, restoration work has begun to bring back the Golden Hinde to its full glory, which is where the unlikely connection with Regal Paint began.When the team working on the Golden Hinde Restoration Project were looking for an attractive and durable paint to use on the ship, they chose Regal Paint for a variety of applications. In high footfall areas, like decks and steps, our paint was selected due to the fact that it was a hard wearing and attractive floor paint. 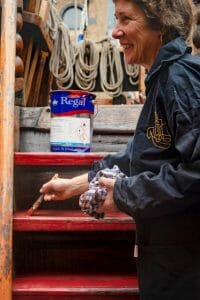 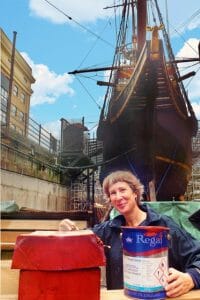 The history of the reconstructed Golden Hinde

The full-size reconstruction of the ship “Golden Hinde” was lovingly constructed using traditional techniques in Appledore, Devon and it was launched in 1973. The recreation of the Golden Hinde was the result of three years of intensive research and construction. Since its build, the Golden Hinde has so far travelled more than 140,000 miles. She sailed out from Plymouth on her maiden voyage in autumn 1974, and arrived on 8 May 1975 in San Francisco, then in 1979, she sailed to Japan to make the miniseries “Shogun”, after which she returned to the UK having completed another circumnavigation, almost 400 years after that first voyage of discovery!

Between the years 1981 to 1984, the Golden Hinde was berthed in England and she was established as an educational museum. She didn’t stay there long though, and in 1984–85, she sailed right around the British Isles and then proceeded to cross the Atlantic to St Thomas in the Caribbean. She passed through the Panama Canal in 1986 to sail on to Vancouver, where she became the top attraction in the Marine Plaza at Expo86. Continuing, in 1987, the Golden Hinde began a tour of US coastal cities and spent two years on the Pacific coast. In late 1988, she crossed back through the Panama Canal and continued to make port visits on the Gulf and east coasts of the USA. Finally, In 1992, she returned home to the United Kingdom and spent the following four years visiting various ports in Europe. Since 1996, she has been berthed at St Mary Overie Dock, in Bankside, Southwark, London, where she is open to the public for visits and hosts a range of educational events and programmes.

Click the link to play the video on the restoration work being carried out on the Golden Hinde.